Indonesia in the Eye of Young Britons

PPI Newcastle was invited to give a short presentation about Indonesia in front of the students in Hotspurs Primary School, Heaton, Newcastle upon Tyne, last June.

The invitation came from one of the teachers, Jack May, who contacted the community regarding to the school’s Indonesian project.

“Our students are going to do a project on Indonesian culture, so we thought it’s gonna be fantastic if we could have Indonesian nationals to come to our school and have a chat about Indonesia”, said Mr. May, who ever lived in Indonesia himself previously.

Represented by Fedelis, Sisilia, Inas and Stella, the team introduced Indonesia to the fourth graders starting from the country’s history to Indonesians general culture, food and nature.

The children seemed really excited about the presentation, as many of them asked further questions afterward. Volcanos and the country’s endemic flora and fauna were among the most asked topics. 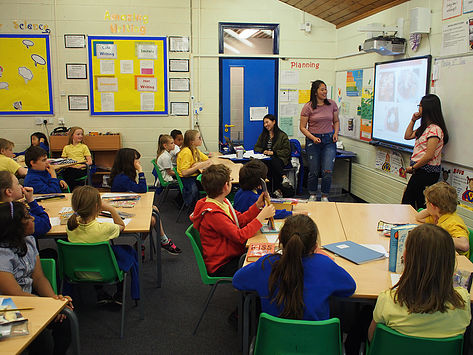 Fedelis Fernando Tosandi, one of presenters as well as the Vice President of PPI Newcastle 2015/2016, stated that invitation from local institutions like this is very appreciated. “Indonesia is located half the world away from the UK. It’s a good opportunity for us to spread information about Indonesia to the local British, so they could be more aware about our country”, said Fedelis.

Shaun Putera Laksana, the President of PPI Newcastle also mentioned that this invitation is beneficial not just for the school, but also to the community.

“One of the visions of our organisation is to reach local community and introduce our culture to them. This event represents our achievement as we were able to spread our identity to the locals, especially in the young age”, Shaun stated.